Complications of Teeth and Implants Adjacent to Canine Implants: A Retrospective Study

Purpose: This study aimed to investigate the prevalence of complications in adjacent teeth and implants when the occlusal scheme changed from canine guidance to group function due to implant placement in canine sites and to compare them according to prosthesis type.

Materials and Methods: This study included 41 patients, in whom 52 implants were placed at canine sites by the same clinician. The biological and prosthetic complications of canine implants, adjacent teeth, and implants were recorded. Fractures or mobility due to the traumatic force of occlusion in adjacent teeth were also recorded. The implants were divided into three groups according to the prosthesis type: (1) single crown (SC); (2) fixed partial denture splinted with anterior implants (SA); and (3) fixed partial denture splinted with posterior implants (SP). The prevalence of complications was compared between the three groups using the chi-square test.

The lateral occlusion schemes include canine-guided occlusion, group function occlusion, and bilateral balanced occlusion.1 The concept of canine guidance is that only canine teeth contact the opposing teeth during lateral excursion,2 and this has been considered the optimal occlusion scheme.3 However, the biomechanical properties of dental implants differ from those of natural teeth. Implants are anchored directly in the alveolar bone without the periodontal ligament (PDL).4 Therefore, the implants remain in their original position during chewing, while natural teeth are inserted into the PDL space, resulting in an over-occlusion state of the implant.5 In addition, proprioception is lower around the implants than natural teeth,4 meaning that excessive forces can be exerted on an implant during a lateral excursion.6 Therefore, when an implant replaces a canine tooth, the lateral excursion is often guided by group function rather than canine guidance.7 A canine implant does not contact the opposing teeth on the working side, and adjacent teeth are included in the lateral excursion.

Changes from canine guidance to group function in lateral occlusion schemes can result in lateral forces on adjacent teeth or implants that have not contacted opposing teeth during a lateral excursion, which can induce occlusal trauma in these teeth or implants. The effects of lateral occlusion schemes on teeth are controversial. Canine guidance was considered to protect other teeth by discluding them during lateral excursion3 and it has been shown that group function is related to progressive occlusal wear.8 In contrast, another study found that variations in lateral occlusion schemes do not affect the amount of tooth wear.9 However, the possibility of occlusal trauma remains. Clinical and radiographic indicators of occlusal trauma include fremitus, mobility, occlusal discrepancies, wear facets, tooth migration, fractured teeth, thermal sensitivity, discomfort or pain while chewing, widened PDL space, and root resorption and cemental tear.10

Lo et al. confirmed that changes in lateral occlusion schemes result in variations in the strains of the peri-implant.11 In addition, occlusal overload was believed to be associated with porcelain fracture, fracture of components of implant-supported overdentures, and loosening or fracture of abutment screws.12 Occlusal overloading is also considered as one of the main causes of marginal bone and implant prostheses failure.13 In particular, the lateral loading on dental implants can induce high stresses in the crestal bone,14 resulting in a loss of osseointegration and excessive marginal bone loss.13

This study aimed to investigate the prevalence of complications in adjacent teeth and implants when the occlusal scheme changed from canine guidance to group function due to implant placement in canine sites and to compare them according to prosthesis types, such as single implant restoration and implant-supported fixed partial denture.

This study retrospectively collected data from 52 implants placed at canine sites in 41 patients by the same clinician between November 2011 and December 2017. All patients underwent regular check-ups. All implants were restored using a group function scheme. Patients aged <19 years were excluded. The sex and age of the patients were recorded and periodontal health was evaluated according to clinical attachment loss (CAL). The patients were assigned to four groups according to the mean CAL value (non-periodontitis, <1 mm; mild periodontitis, 1-2 mm; moderate periodontitis, 3-4 mm; and severe periodontitis, >5 mm). Data on the reason for extracting the canine, implant placement site, prosthetic type of opposing dentition, and implant prosthesis type were obtained.

The implants were divided into three groups according to the prosthesis type: (1) single crown (SC); (2) fixed partial denture splinted with anterior implants (SA); and (3) fixed partial denture splinted with posterior implants (SP). Figure 1 shows panoramic radiographs of the patients in each group. The prevalence of each complication was evaluated according to the group and intergroup comparisons were performed using the chi-square test. All statistical analyses were performed with SPSS software (version 23, SPSS, IL, USA). 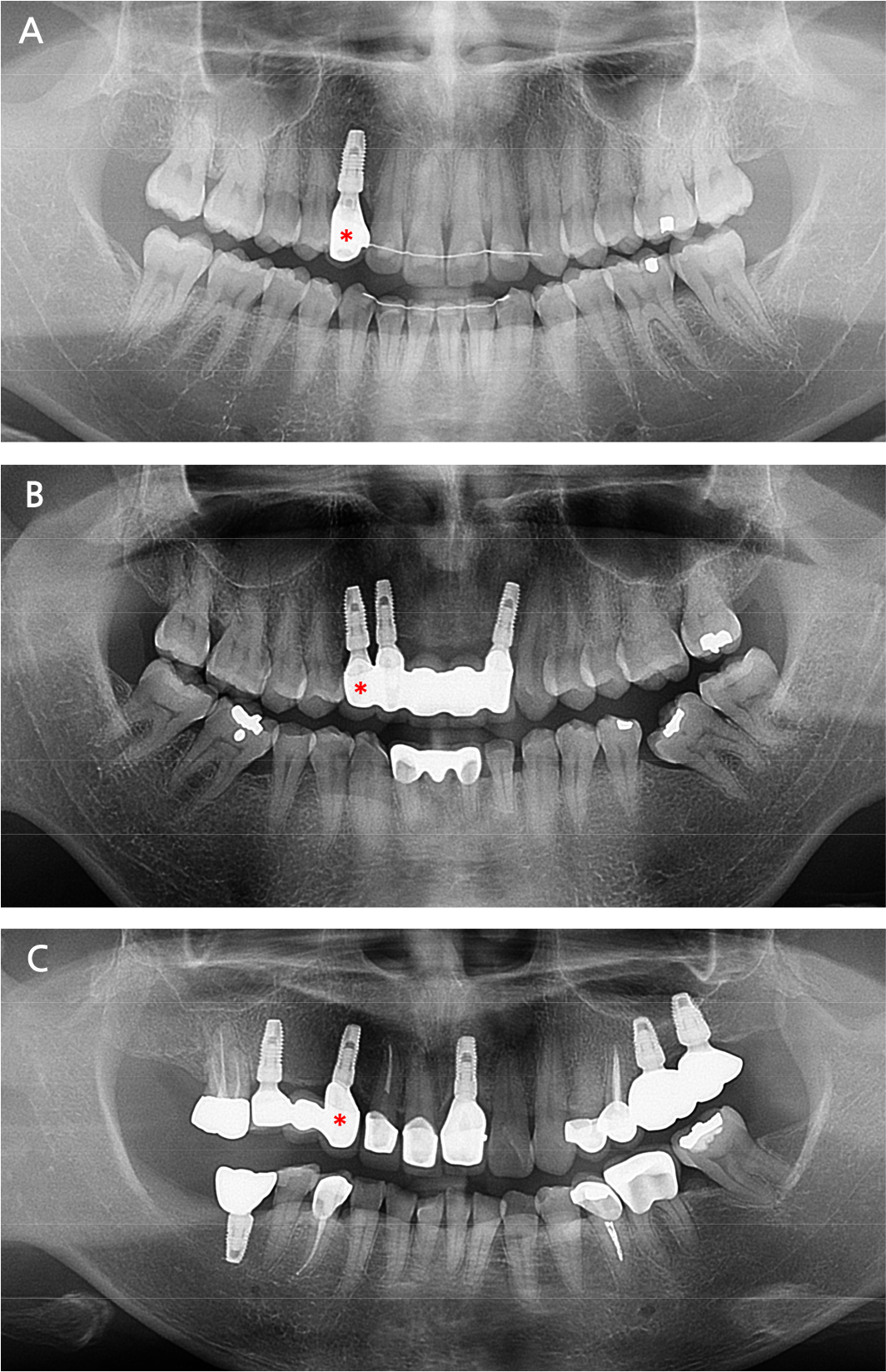 The study protocol was reviewed and approved by the institutional review board of the National Health Insurance Service Ilsan Hospital (IRB no. NHIMC 2019-04-010).

Twenty female patients included in this study were treated with 26 implants, and 21 male patients were treated with 26 implants. The mean age of the patients was 57.2 years (range, 20−82 years). The reasons for the extraction of canines included congenitally missing teeth, dental caries, periodontitis, tooth fracture, and root rest. There were nine implants in the SC group, 26 in the SA group, and 17 in the SP group. The patient- and implant-related variables of these groups are listed in Table 1. The mean age and severity of periodontitis differed significantly between the three groups (p < .05), as did the severity of periodontitis (p < .05).

The main reason for the extraction of canines was congenital missing in the SC group, periodontitis in the SA group, and dental caries in the SP group (Fig. 2). However, the difference was not significant between the three groups when evaluated using the chi-square test (p > .05). 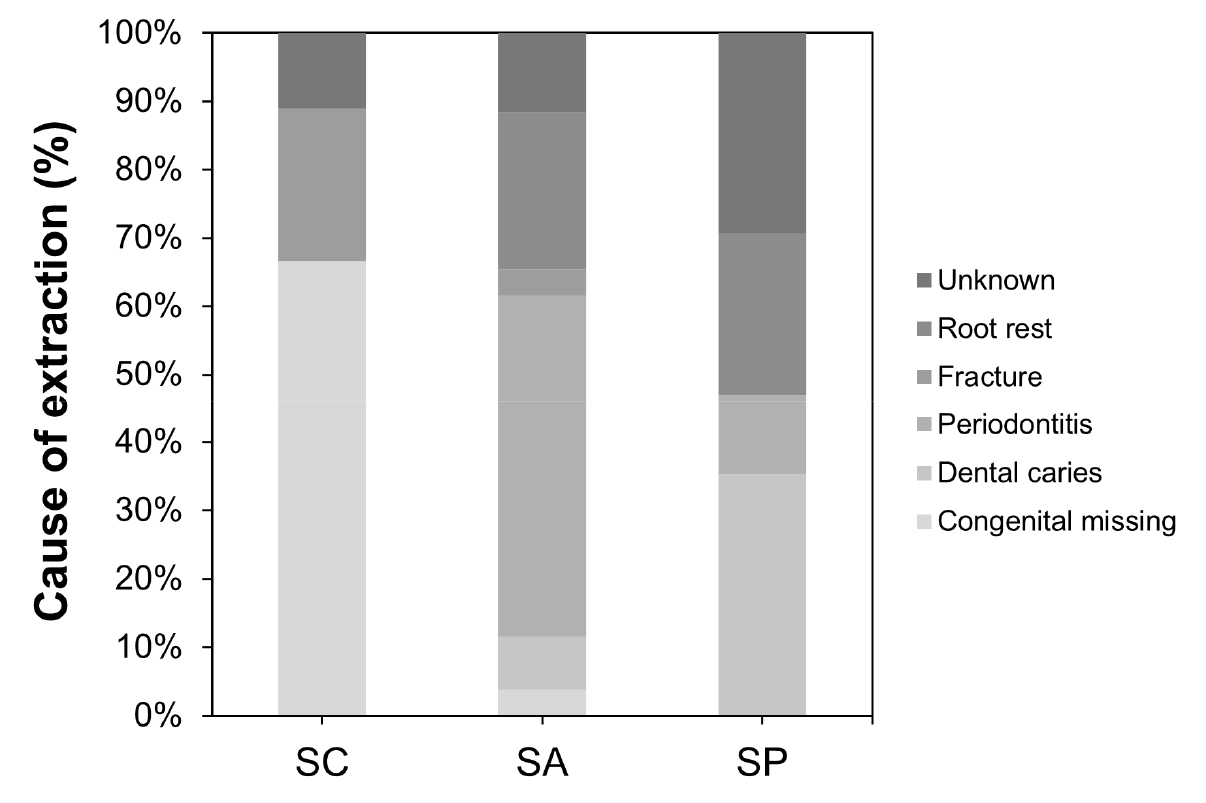 Reasons for extraction of canines.

Complications of canine implants and adjacent teeth or implants

When a dental implant replaces a lost canine, the lateral excursion is often guided by group function rather than canine guidance.7 Therefore, this study investigated the prevalence of complications in adjacent natural teeth and implants when the occlusal scheme changed from canine guidance to group function due to implant placement at canine sites.

The prevalence of tooth or implant complications adjacent to canine implants was 15.4% in this study. However, it is difficult to conclude that these complications occurred because the implants were placed in the canine and the canine guidance was avoided. Implant placement at any other site can result in excessive occlusal force on adjacent teeth when the occlusion of implants is altered to prevent occlusal overload of implants.4 Resen et al. showed implant-associated vertical root fractures in adjacent endodontically treated teeth.19 They suggested that the increased occlusal load was distributed to adjacent natural teeth to decrease occlusal loads in implants. Our study team previously reported that 10.2% of patients with molar implants showed traumatic occlusion of adjacent premolar teeth,20 in which symptoms of traumatic occlusion, such as fremitus, PDL space widening, and tooth mobility, were observed. They suggested that these results might be due to the lack of PDL and reduced proprioception around the implants.

The present study found signs of traumatic occlusion, including tooth mobility, fracture, and implant complications. Mobility of the adjacent tooth was observed in one subject. Occlusal trauma can result in tooth mobility, but tooth mobility can also result in attachment loss.9 The patient who showed tooth mobility in the present study had mild periodontitis; therefore, the effect of attachment loss was negligible. Three subjects showed fractures of the teeth adjacent to or opposing the canine implants. A tooth fracture was also observed in our previous study mentioned above.18 Comparing the present result with the previous result suggests that teeth adjacent to canine implants seemed to experience more excessive occlusal forces than teeth adjacent to molar implants. Tooth fractures occurred only in the SP group. Posterior implants splinted with a canine implant were fabricated to avoid lateral forces exerted on the implants. As a result, it was speculated that not only would the masticatory discomfort of patients increase, but unexpected occlusion problems would also arise and excessive forces might be applied to the anterior teeth during eccentric occlusion or even centric occlusion. As the adjacent teeth in the SP group were anterior teeth with a single root, occlusal trauma could easily affect them. In the SC group, most of the canines were congenitally missing, while the other dentition consisted of natural teeth. Therefore, natural teeth in the posterior area were included in the group function and they might be adapted to changes in the occlusion scheme. Furthermore, subjects in the SC group were significantly younger than those in the other two groups, and none had severe periodontitis. Subjects in the SA group also showed no complications in their adjacent teeth. All adjacent teeth were premolars in this group because the incisors had been replaced by implants splinted with canine implants. These posterior teeth might have adapted to changes in the occlusion scheme, as in the SC group.

The main limitation of this study was that tooth wear was not evaluated because data were retrospectively obtained from chart reviews and panoramic radiographs. Only complications that required additional dental treatment were recorded. Another limitation is the small sample size. Only nine patients were in the SC group because canine teeth were rarely extracted alone.

This work was supported by the National Health Insurance Service Ilsan Hospital, 2019 (grant no. NHIMC2019CR029). The authors declare that they have no conflicts of interest related to this study.