Purpose: The objective of this study was to investigate the effect of indented structures, such as dimples and retention groove formations, on the retention of titanium abutment walls when cementing cobalt-chromium (Co-Cr) alloy crowns with zinc oxide-eugenol cement.

Materials and Methods: Forty-eight titanium abutments (n = 6) were prepared, of which 24 abutments were 4.0 mm and the other 24 were 6.0 mm in height. These 4.0 mm and 6.0 mm abutments were organized into eight groups: no-dimple, 2-dimple, 4-dimple, and axial retention groove groups. The position and dimensions of the dimples and axial retention grooves were the same for all prepared abutments. Laser-sintered cobalt-chromium (Co-Cr) alloy crowns were cemented using a provisional cement. After thermocycling, a retention test was performed using a universal testing machine. Statistical analysis was performed using the nonparametric Kruskal–Wallis test and post-hoc Mann–Whitney U test (𝛼= .05) to compare the mean retentive force.

Conclusion: Within the limitations of this in vitro study, the mean retentive force was higher with dimples and axial retention grooves for 4.0 mm titanium abutments but was statistically insignificant (p > .05). An increase in abutment height was statistically correlated with an increase in retentive force within the same number of dimple-groups (p < .05).

Partial edentulism has been a growing concern for many patients and dental practitioners are aiming to find promising methods of oral rehabilitation. To overcome the discomfort and disadvantages of traditional removable partial dentures, dental implant restorations have been developed and are widely used for a variety of treatment options for edentulous patients.1,2,3 Although implant-supported restorations provide predictable outcomes, they should be carefully performed, from surgical planning to prosthesis design and fabrication, to avoid undesirable results.4,5

One of the most common implant-related complications is decementation of the crowns, along with other complications, such as screw loosening and fracture of ceramics or implant fixtures.6 This may be a frustrating experience for the patient and eventually jeopardizes the longevity of the crown and implant itself. Screw-type implant-supported crowns have some advantages over cement-retained implant-supported crowns, such as easier accessibility and limited inter-arch distances.7 However, there are circumstances in which cement-retained crowns are inevitable due to esthetics or poor angulation of the screw access channel.8 In such cases, the optimal retentive force between the implant abutment and the crown is critical.

Previous studies have introduced various methods to increase the retentive force of cement-retained, implant-supported crowns. Covey et al.9 reported that abutment height and height-to-width ratio were positively related to retention strength, while an increase in the surface area of the abutment did not improve retention strength. Pinelli et al.10 stated that the retention of cast crown copings seemed to be affected significantly by the different types of luting cements applied.

Bernal et al.11 emphasized the importance of abutment height, where longer abutments have significantly increased the force of retention compared to shorter abutments. However, limited interocclusal distance is often encountered in clinical situations; hence, methods for improving the retentive force for short implant abutments should be explored. The purpose of this experiment was to evaluate the effect of locating different numbers of indented structures, such as dimples and vertical retention grooves, on the retention of titanium abutment walls when cementing cobalt-chromium (Co-Cr) alloy crowns with zinc oxide-eugenol cement.

Six titanium abutments (5.5 mm diameter) were fabricated for each group using a computer-aided design/computer-aided manufacturing (CAD-CAM) milling procedure. Eight groups were tested during this experiment involving 48 titanium abutments, of which 24 were 4.0 mm in height and the other 24 were 6.0 mm in height. The tapering convergence angle of the abutment walls was six degrees on each side. Groups with no surface modifications were considered as the control group. The second group had 2 dimples (1.5 mm-wide and 0.75 mm-deep) formed 1.0 mm above the gingival margin of the abutments. The two dimples were located on the opposite side of the abutment wall. The third group had four dimples with the same dimensions that were exactly at 90° from each other on the abutment wall. An axial retention groove (1.5 mm-wide and 0.3 mm-deep) was formed 1.0 mm above the gingival margin in the last group (Table 1). The designed abutments were milled using grade 5 titanium disks (Figs. 1 and 2).

Summary of study groups tested for the experiment 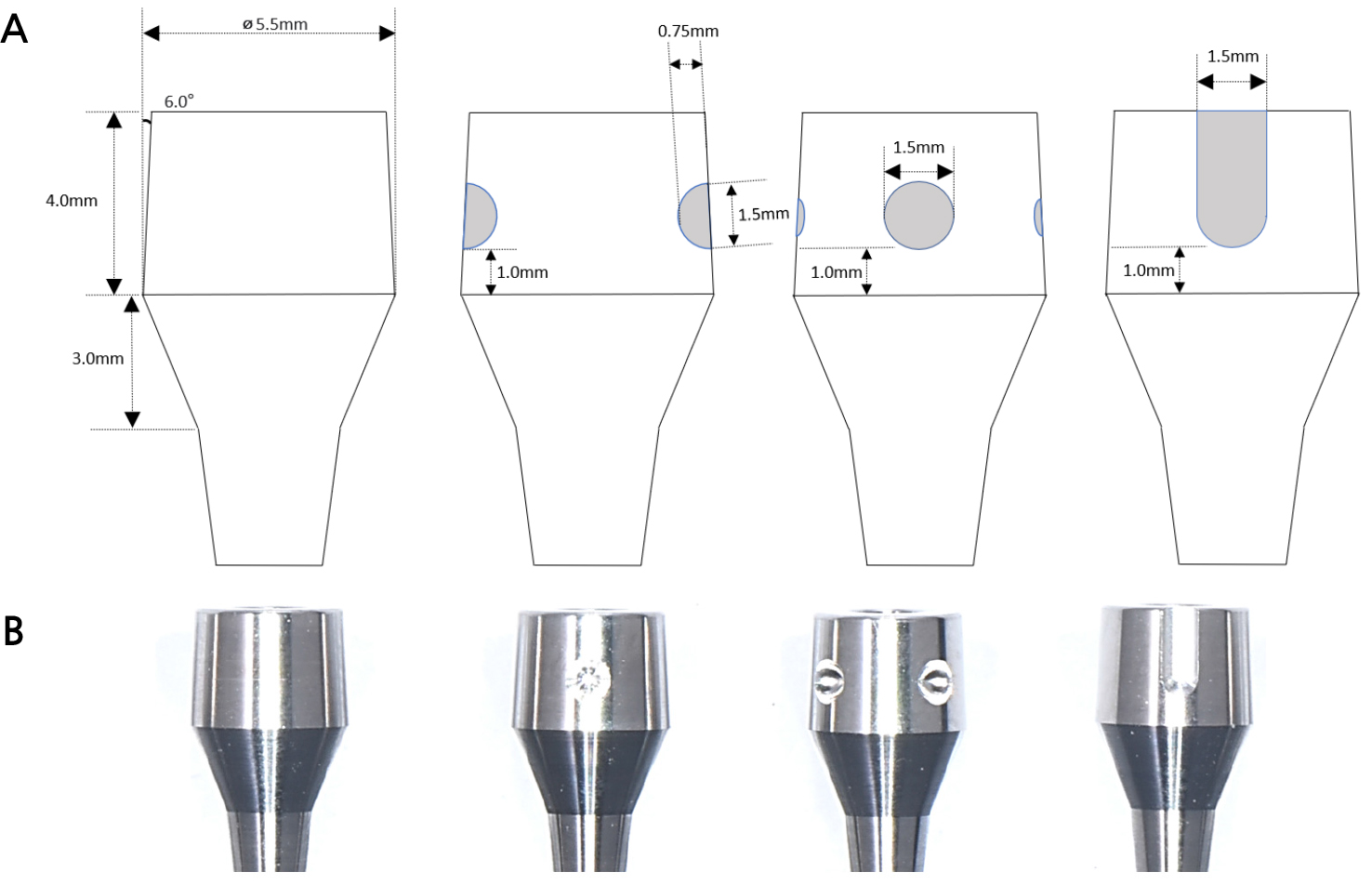 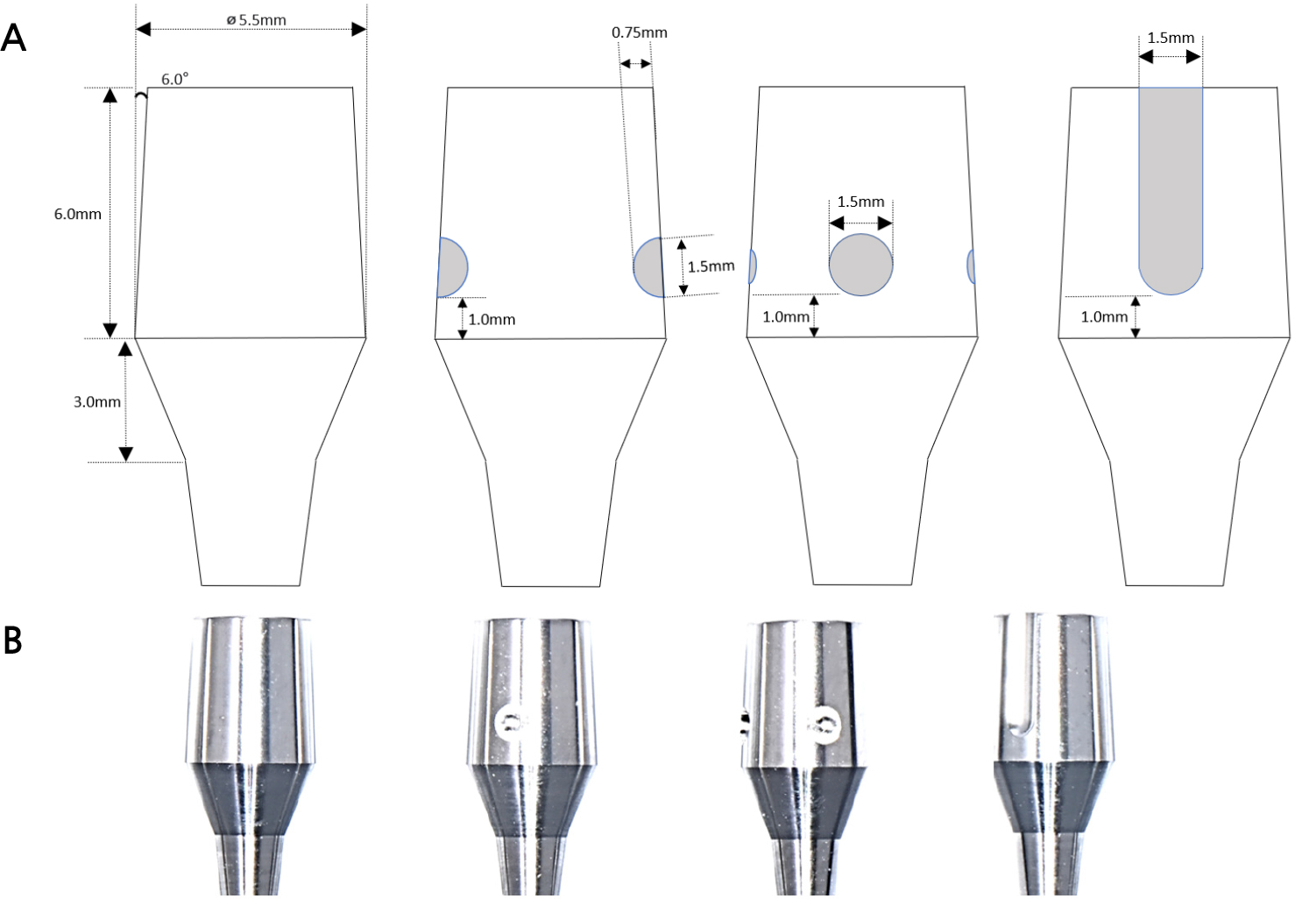 The abutments were fixed to an internal type 4.3 mm-wide laboratory analog (Warentec, Seoul, Korea), and titanium abutment screws were tightened at 30 N/cm according to the manufacturers instructions. The screw access channel was filled with polytetrafluoroethylene (PTFE) tape and Fermit (Ivoclar Vivadent AG, Schaan, Switzerland), which was light-cured for 20 s. The crowns were cemented using zinc oxide-eugenol Temp-Bond cement (Kerr, Salerno, Italy). The crowns were pressed with a 5 kg load for 10 min, and excess cement was carefully removed using a dental explorer (Fig. 4). The cemented implant prosthesis was then submerged in cold (5°C) and hot (55°C) baths simultaneously for 10,000 cycles to simulate an oral environment (Fig. 5). 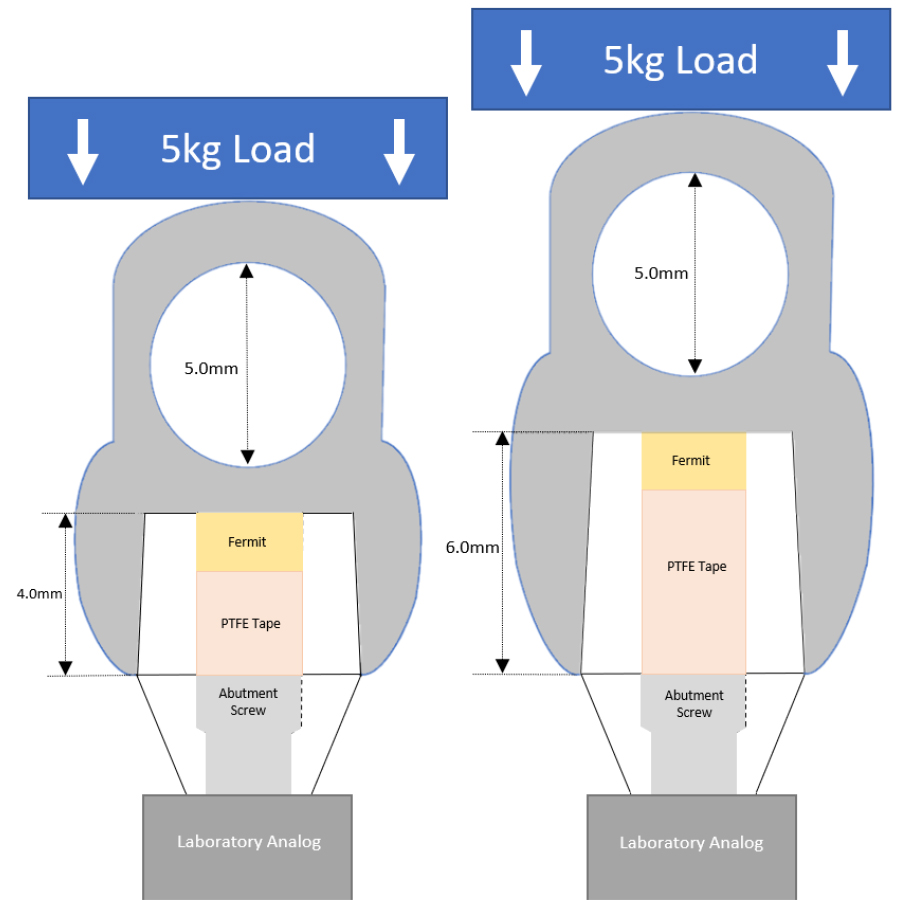 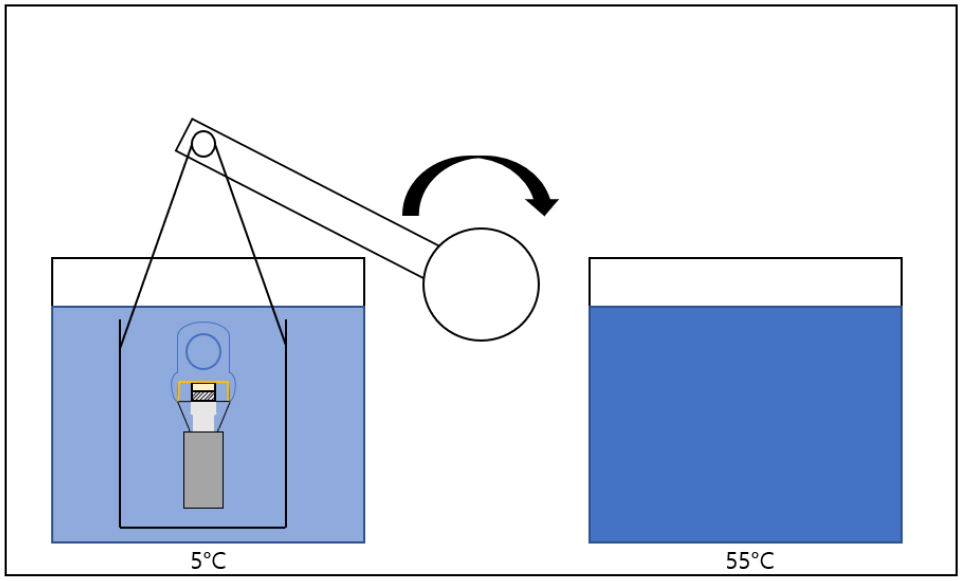 After thermocycling, the specimens were dried gently with air. A universal testing machine (TW-D102; Taewon Tech Co., Seoul, South Korea) was used to test the retention force. A curved hook was connected through the open hole of the upper crown, and laboratory analogs embedded in the acrylic resin block were held by the machine’s specimen holder (Fig. 6). The tensile load speed was set to 5.0 mm/min and the uniaxial retention force in Newtons (N) applied to dislodge the cemented crown from the abutment was recorded. 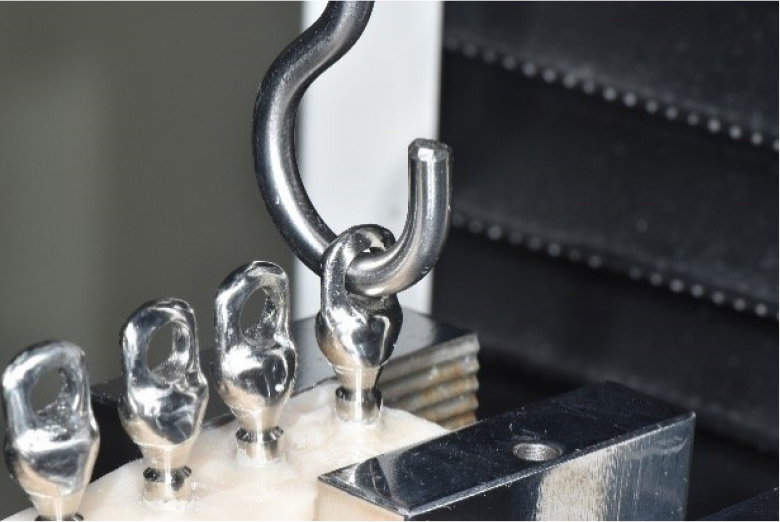 A nonparametric Kruskal−Wallis test and post-hoc Mann−Whitney U test were conducted to assess the change in retention forces between the groups. During the analysis, p-values smaller than 0.05 were considered statistically significant. All analyses were performed using the Statistical Package for the Social Sciences (SPSS) software ver. 25.0 (IBM SPSS Inc., Chicago, IL, USA) 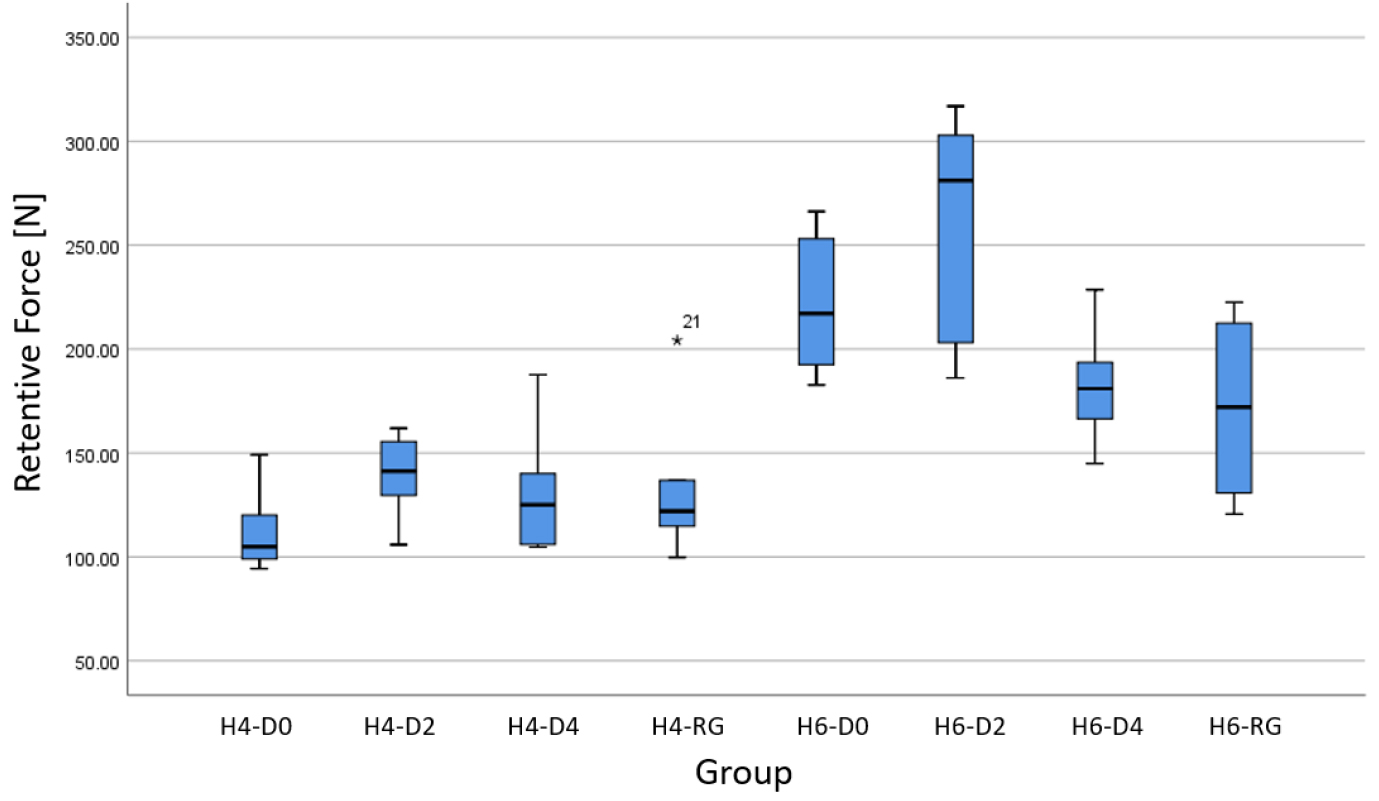 There was no statistical difference in the 4.0 mm abutment groups (p > .05), while the 6.0 mm abutment groups showed a statistically significant difference between the groups (p < .05). Specifically, the Mann-Whitney U test revealed that 6.0 mm abutments with 4-dimple groups showed significantly decreased retentive force when compared to that in the 6.0 mm control group with no dimples (p < .05) (Table 3). Only when the height of the abutment was increased from 4.0 mm to 6.0 mm with the same number of dimples, the change in mean force of retention was statistically significant (p < .05) (Table 2).

Summary of means and standard deviations (SD) of retentive force in Newtons, and p-values for 4.0 mm and 6.0 mm abutment groups as approved by Kruskal-Wallis test

The total number of specimens tested in this study was 48 for titanium abutments and Co-Cr alloy crowns. Although various indented structures such as hemispherical dimples and axial retention grooves were used during this experiment, the number of abutments prepared for each group (n = 6) was relatively small. To support the effect of such indented structures, a larger sample size would be able to provide stronger statistical power.13

In addition, the diameter and depth of hemispherical dimples should be evaluated. In this experiment, 1.5 mm-wide and 0.75 mm-deep dimples were formed 1.0 mm above the gingival margin of the abutments. It was designed in a way that would consider the abutment wall thickness (approximately 1.2 mm). The use of different dimple dimensions may lead to different results for the mean force of retention. Similarly, any alterations in the vertical position of the dimples may be able to record changes in the retentive forces; however, further studies are required.

The luting cement used in this study was limited to Temp-Bond (Kerr, Salerno, Italy). Temp-Bond is a zinc oxide-eugenol cement (ZOE), which is commonly used for provisional cementation of dental prostheses. Despite their ease of use, fractional stress relief, and low cost,14 authors have suggested that ZOE cements have lower bonding strengths than resin, zinc phosphate, or glass ionomer cements.15,16,17 Based on these previous studies, the application of different types of cements would be a contributing factor to the change in retentive forces between the implant abutment and its cement-retained upper crowns.

Within the limitations of this in vitro study, the following conclusions were drawn:

1.The mean retentive force generally increased when dimples and retention grooves were formed on the 4.0 mm titanium abutment axial walls; however, the change was not statistically significant.

2.Forming four dimples on the axial walls of 6.0 mm titanium abutments may be less effective in improving retentive force.

3.If the abutment height increases from 4.0 mm to 6.0 mm, the mean retentive force increases when the number of dimples remains the same.

This work was supported by the Technology Innovation Program (20007888, Development of dental surgery and treatment assistant robot and navigation system technology for high-precision implant surgery) funded by the Ministry of Trade, Industry & Energy (MOTIE, Korea).