Minimal Electrocautery as an Alternative Approach for Implant Removal: A Preliminary Animal Study

Purpose: This study aimed to introduce electrocautery for failed implant fixtures removal and to compare the results of this technique according to electrocautery time.

Materials and Methods: Implants were placed in the femoral condyle of 12-week-old male New Zealand white rabbits. Five implants in three rabbits were used as the experimental group, and two implants in one rabbit were used as the control group. Six weeks later, electrocautery was performed at 30 W for 10 sec and 15 sec in the experimental group, whereas electrocautery was not performed in the control group. One week later, the implants were removed by hand wrench, and histological analysis was performed.

Results: At six weeks af ter implant placement, histological analysis confirmed osseointegration of the fixtures. As a result of electrocautery, the removal torque of implant fixtures was reduced, and osseointegration broke down. There was no difference in the histologic images of the specimens af ter removal of the fixture between the experimental and control groups.

Conclusion: This study showed that minimal electrocautery with low output for a short time can be utilized for implant removal with minimal damage to the surrounding bone.

Dental implants are a universally accepted approach for prosthetic rehabilitation of lost teeth.1 Implants may fail following inflammation, bone loss, and loss of function. Several methods and tools are available to remove failed dental implants.2 These methods include procedures using bur-forceps, trephine drills, wrenches, bone chisels, and piezosurgery, which may damage the alveolar bone of the surgical sites. Even with these techniques, removal of failed implant fixtures may be difficult in some cases. Severe bone damage causes delayed healing of the bone area where the implant is removed. Therefore, the use of electrocautery, which is less invasive than other methods, has been suggested for failed implants removal.3

The study protocol was approved by the Seoul National University Institutional Animal Care and Use Committee (SNU-210114-2).

Implant fixtures of Ø3.6 × 6 mm (Dentium, Suwon, Korea) were placed using an implant engine (Elcomed ® , W & H Dentalwerk; Bürmoos, Austria). An incision was made on the femoral condyle, and the full-thickness flap was elevated. The implant was placed with a final torque of 35 Ncm after sequential drilling according to standardized protocols. A cover screw was connected to the fixture, and a suture was performed.

Six weeks after implant placement, an electrosurgical unit (ESU, Meditom ® , Daiwha, Seoul, Korea) was used to deliver current to the implant fixture of the experimental group (Fig. 1). The cover screw of the implant fixtures was removed for internal current delivery to the fixture. Then, an electrode was connected to the implant threads, and electrocautery was performed at 30 W for 10 sec and 15 sec for each implant fixture in the contact mode as monopolar electrocauterization (Fig. 2). This condition was designed to reduce thermal necrosis of the bone. Park et al. reported that electrocautery at 40 W for 40 sec reduced the removal torque of implants, but it led to bone dissolution. 4 Electrocauterization was confirmed by observing features of thermal damage to the bone. To confirm that electrocautery stimulation was not strong enough to immediately remove the implant fixtures, fixation of the implants was checked. The electrodes of the ESU were disconnected, and an implant torque wrench was used to attempt implant removal with a torque of 35 Ncm. The implant fixture was not rotated or removed using reverse torque. 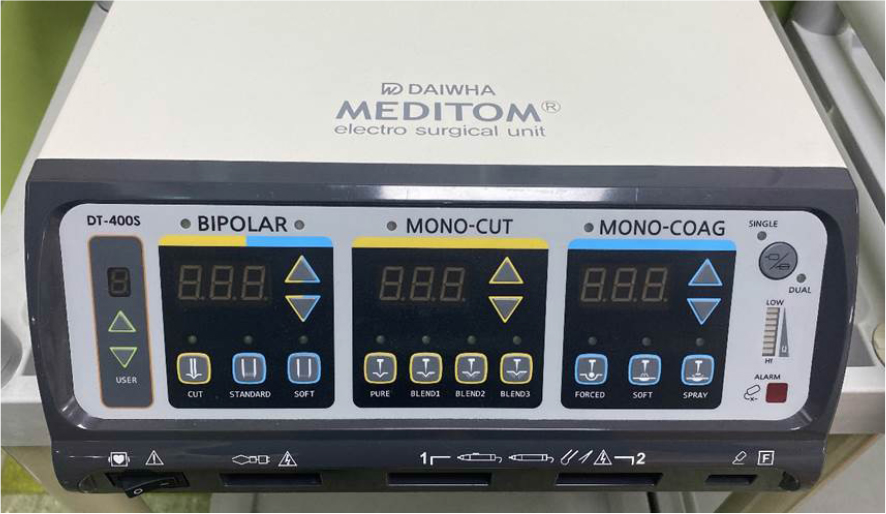 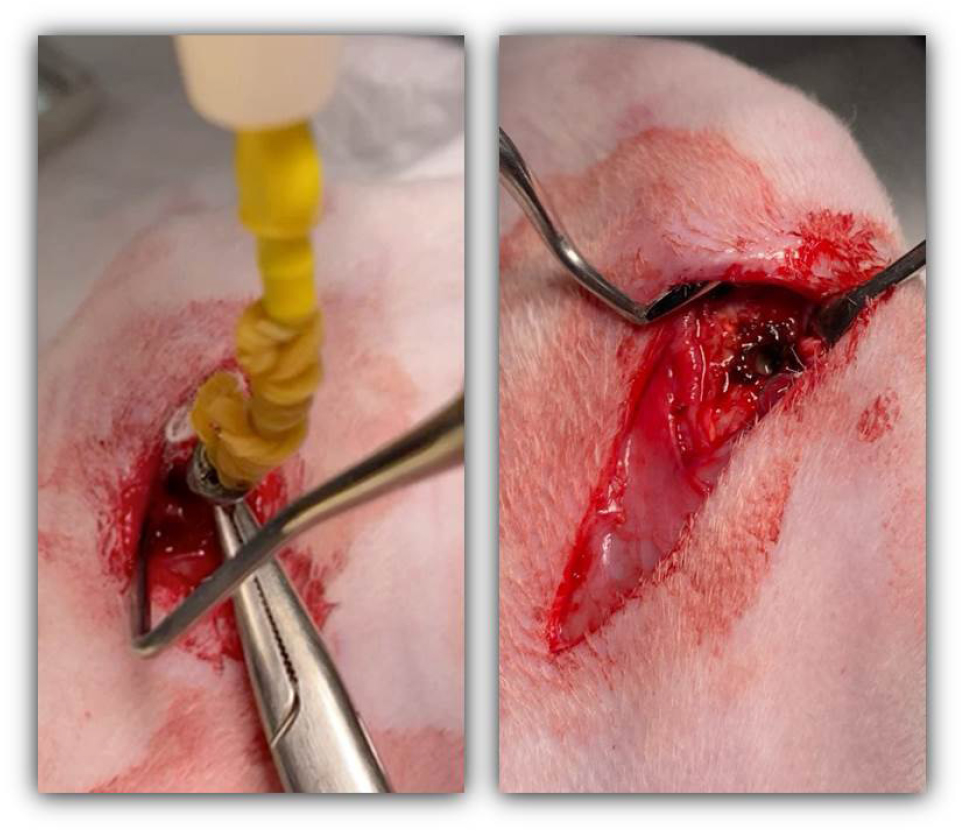 Electrocauterization on the implant fixture. 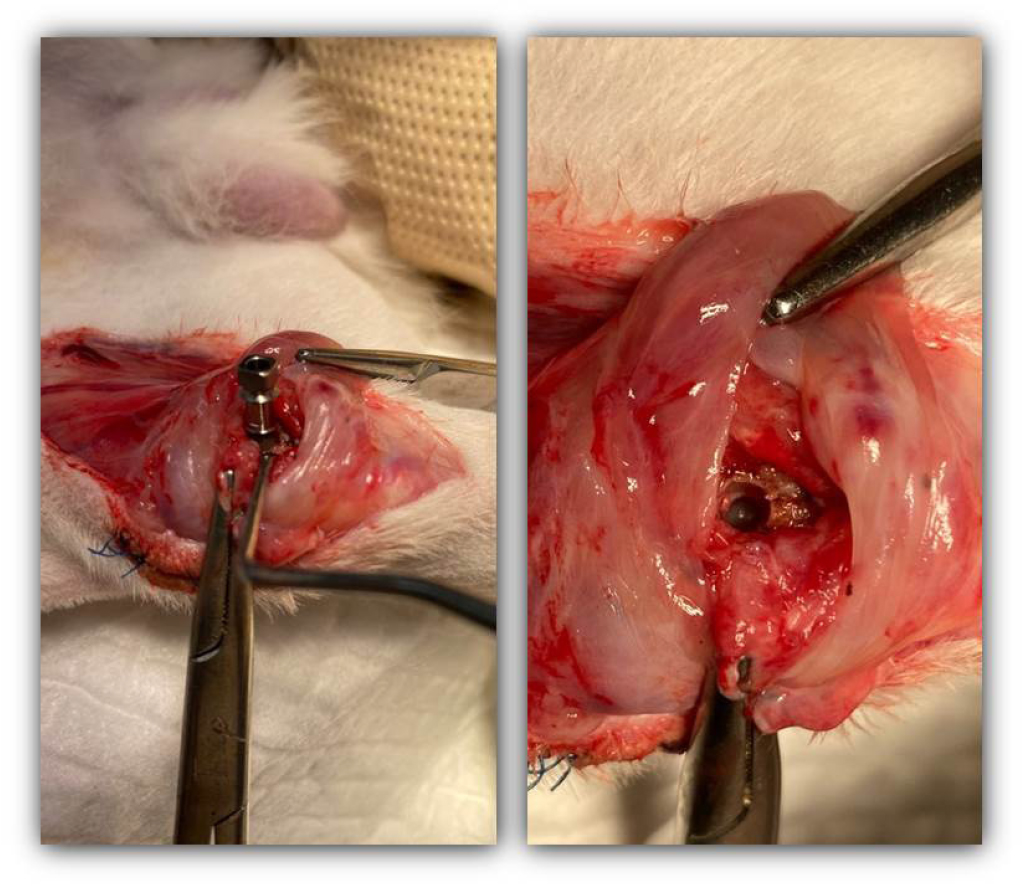 Histological examination was conducted to compare the bone around the implant fixtures between the control and experimental groups. Potassium chloride (KCl) solution was administered to sacrifice the rabbits, and specimens were obtained. The specimens were fixed for 48 hr in formalin and stained with hematoxylin and eosin. 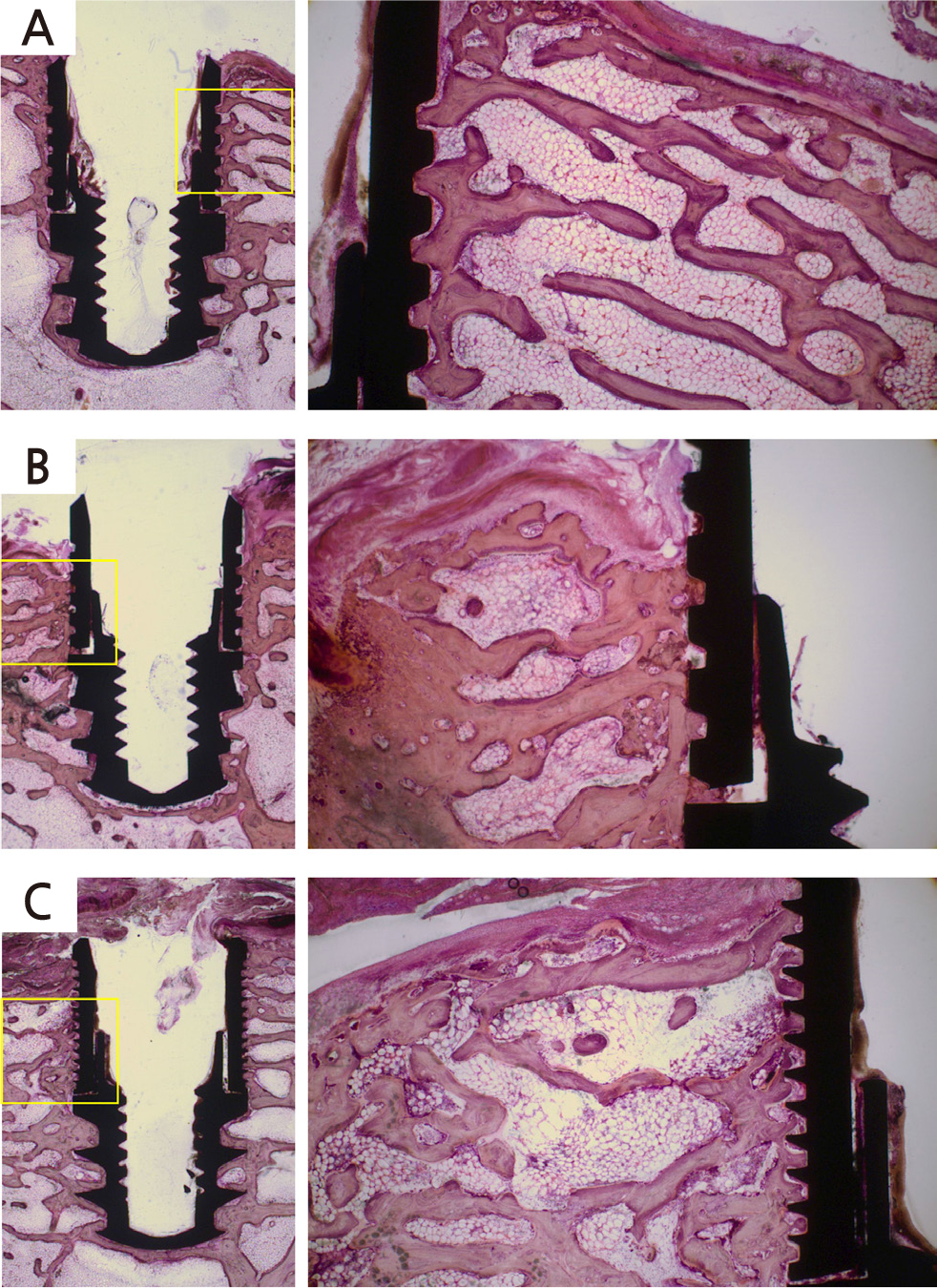 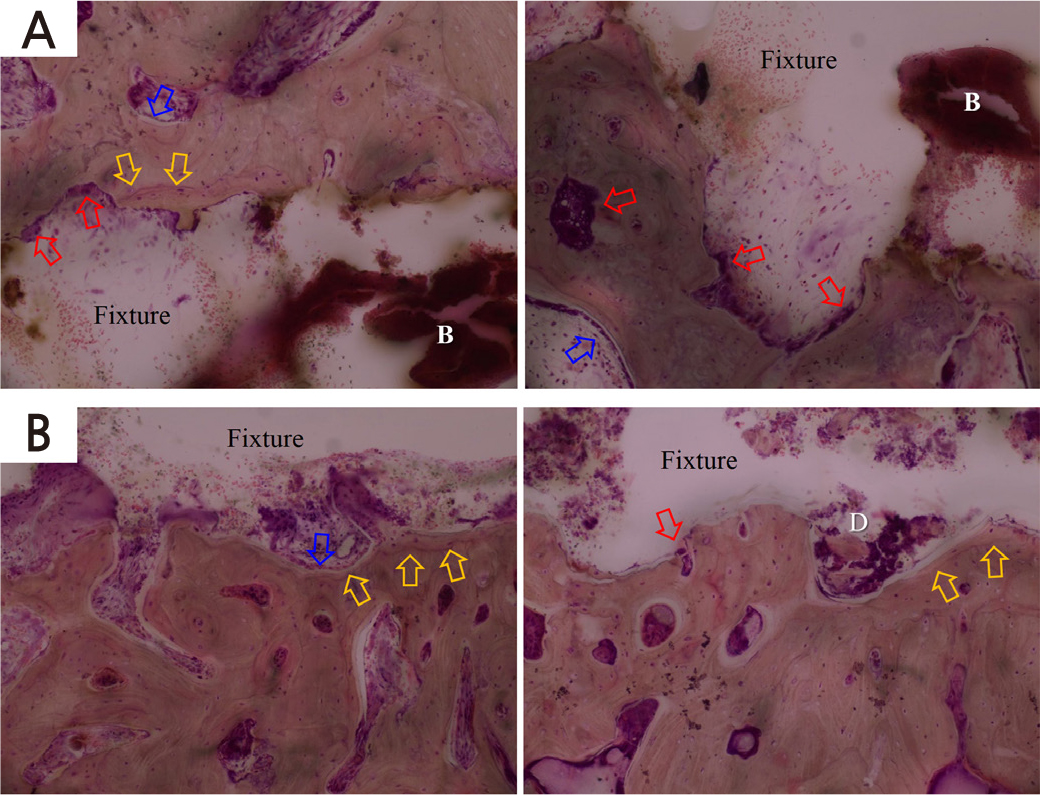 Five and two implants were placed in three rabbits in the experimental group and one rabbit in the control group, respectively. Although statistical significance was not performed in this study, our preliminary work may serve as the basis for subsequent studies on the electrocautery method to remove failed implants. One of the purposes of this study was to optimize the electrocautery technique. At this time, the minimum power (wattage) and time required to remove the failed implants were assessed. Applying electrocautery at 30 W for 10 sec was sufficient to ease the removal of fixtures without thermal damage to the surrounding bone.

Park et al. evaluated the fixation of implant fixtures using electrocautery.4 In their study, implant fixtures were placed in bones isolated from dead pigs. When implant fixtures were removed immediately after placement, the torque was significantly lower when a greater wattage was applied for a longer duration. The application of 30 W for 20 sec led to thermal necrosis of the bone, and the average torque was not different from that of the control group. However, it was significantly lower in the group that was stimulated at 40 W for 40 sec compared with the former group and the control group. This suggests that electrocautery stimulation at 40 W for 40 sec reduces the torque required to remove fixtures immediately after placement. However, monopolar electrocautery was applied to the inner surface of the implant fixtures immediately after placement. Thus, stability after osseointegration could not be assessed. The main finding of that study was that the heat generated by electrocautery may cause bone necrosis, which can break the mechanical bond between the implant and the surrounding bone.

In this study, electrocautery was applied at 6 weeks after insertion of the implant fixture, when osseointegration occurred, in order to better mimic the environment at the time of removal of failed implants after osseointegration. Histological analysis showed the formation of new bone between the implant threads and bone-to-implant contacts in samples of the control group before implant removal. These findings suggest the presence of successful osseointegration at 6 weeks.

In samples of the experimental group taken before implant removal, a gap was observed in the newly formed bone between the thread and the implant interface, and inflammatory cells were lined at the boundary of the bone. These findings suggest that bone remodeling is induced by an inflammatory response after electrocauterization. We also observed that the removal torque of implants was reduced in the experimental group one week after electrocautery stimulation. Histological images of tissues after implant removal showed similar patterns and findings between the two groups. Overall, these findings suggest that bone remodeling and inflammatory reactions caused by electrocautery are similar to those induced by the application of removal torque.

Application of electrocautery with stimulation strong enough to immediately remove implants may also induce bone necrosis in an unnecessarily wide area. In this study, the power output was reduced compared with that in a previous study. 4 Instead, implant removal was attempted one week after electrocautery stimulation to allow bone remodeling. As a result, implants could be removed with a small power output, and histological evaluation showed minimal damage to the bone around the removed implant.

Electrocautery of implants induces thermal necrosis of the surrounding bone and weakens the boneimplant interface; however, this can delay wound healing and lead to necrosis of a large area of the bone. Stimulation at 47°C for more than 1 minute can cause thermal damage to a greater area of the bone.5 Therefore, the temperature must be carefully considered for re-implantation. It is important to preserve the residual bone after removal, as re-implantation may also be necessary. As a result, damage to the surrounding bone by electrocautery must be considered. Therefore, the findings of this preliminary study are significant.

Bur-forceps, trephine drills, high-torque wrench, bone chisels, and piezosurgery can be used to remove failed dental implants.2 Although these techniques are effective, they cause damage to the surrounding bone. Thus, less invasive methods for removing failed implants have been sought. The results of this study suggest that electrocautery may be an alternative method.

The use of an electrocautery unit is easier and less invasive than other methods. However, when excessive currents are applied to the fixture for a long period, this technique can also cause thermal damage to the alveolar bone surrounding the implant fixture, leading to bone necrosis or damage to the surrounding bone tissues. Dentists must also be careful not to touch other teeth or restorations when electrodes are connected to implant fixtures for removal. In a study by Krejci et al. on dogs, direct contact of an electrocautery device with Class V amalgam restoration for more than 0.4 seconds resulted in pulpal necrosis in the dogs’ teeth.6 Additionally, Zach and Cohen reported that in monkeys, a 5.5°C increase in pulpal temperature induced pulpal necrosis or pulpitis in 15% of the cases.7

In a previous case report, electrocautery was applied to the inner surface of failed implants to induce thermal necrosis. One week later, the implant fixture was easily removed using a hand wrench with a torque less than 30 Ncm.3 Similarly, in this study, we assumed that electrical stimulation would lead to physiological responses, disrupt osseointegration, and induce inflammation, allowing the removal of fixtures with a reduced torque.

However, the current study is only a preliminary study. Further study with a large sample size is necessary for the statistical analysis of the effect of the electrocautery procedure. Additionally, the methodology needs to be improved to confirm osseointegration and assess deosseointegration and thermal damage.

Monopolar electrocautery could assist in the removal of failed or misplaced dental implants without removal of the surrounding alveolar bone. Based on the findings of this preliminary study, further studies must be conducted in consideration of the biological reactions and minimum energy required for effective electrocautery. Electrocautery can be an alternative method for removing implant fixtures. Protocols for electrocautery should be further investigated for standardization.