This article demonstrates a clinical case of the rehabilitation of a maxillary anterior tooth with a single-implant using a digital workflow. Intraoral scanner-based mandibular movement data were incorporated into the workflow for the fabrication of an immediate provisional restoration to preclude unintended loading on the restoration. The digital workflow enabled minimum adjustment to the restoration during centric and eccentric movements and allowed to achieve esthetic outcomes for both the provisional and definitive restorations.

Rehabilitation with an implant is a predictable treatment option for a single missing tooth area.1 However, treatment with implants in the anterior maxillary region should be approached with care because of the aesthetic demands.2 Moreover, the anatomical condition is unfavorable due to the relatively narrow width of the ridge, thin gingival biotype, and the need for maximizing placement in all three dimensions.3

It has been reported that immediate placement and provisionalization can positively influence the creation and adequacy of the emergence profile, enhancing the formation of the papilla, guiding the morphological development of the peri-implant mucosa, and controlling the design of the final restoration.4,5 In case of implant placement in the maxillary anterior regions, occlusal forces are directed obliquely rather than axially, which may cause loosening of abutment screws and fracture of provisional restoration. A prosthesis designed to avoid an unintended occlusal force can reduce this complication.6

Recently, a simple and straightforward method for recording dynamic occlusion data using an intraoral scanner has been introduced. Along with the static scan data obtained with the intraoral scanner, it became possible to design and fabricate a prosthesis considering mandibular movement through computer-aided design/computer-aided manufacturing (CAD/CAM) technology. This report describes the successful application of an intraoral scanner-based mandibular movement scanning in a case requiring rehabilitation with a single implant in the maxillary anterior tooth region.

A 55-year-old female patient presented to the Department of Prosthodontics at Yonsei University Dental Hospital to receive treatment for a mobile maxillary right lateral incisor. The tooth was diagnosed as a horizontal root fracture with a hopeless prognosis (Fig. 1).

Hence, it was decided that the tooth be extracted and rehabilitated with a single implant. The tooth was extracted atraumatically without flap reflection, followed by immediate implant placement (Straumann BLT, Institut Straumann AG; 3.3 × 10 mm) to preserve the papilla, with bone graft procedures in the buccal gap defect with bovine-derived xenograft materials (Bio-Oss collagen; Geistlich Pharma AG) (Fig. 2). The implant was placed along the palatal wall of the extraction socket, at the center of the extraction region in the mesio-distal aspect and 3 mm apical to free gingival margin.

Occlusal view immediately after the completion of surgical procedure.

As the primary stability of the implant was 30 N·cm, immediate provisionalization procedures proceeded as planned. A scan body (Geo Scanbody; GeoMedi) was connected to the implant, and digital impression was obtained with an intraoral scanner (TRIOS 3; 3Shape A/S). Subsequently, dynamic occlusion records (Patient Specific Motion; 3Shape A/S) were additionally obtained using the same intraoral scanner (Video 1). The obtained information was imported into the CAD software (Dental System; 3Shape A/S), and a screw-type immediate provisional restoration was designed. Any interferences observed were visualized and removed in the software using the dynamic occlusion records obtained during the intraoral scanning phase (Fig. 3).

The restoration was fabricated with a polymethylmethacrylate resin block (VIPI Block Trilux; Dental VIPI Ltda) and a milling machine (M4 Wet Heavy Metal Milling Unit; Zirkonzahn), and cemented to a titanium link abutment (Geo Multibase Abutment; GeoMedi) with a resin cement (Multilink N; Ivoclar Vivadent). This screw-retained provisional restoration was placed on the same day of implant surgery. Occlusion was evaluated to verify that there was no contact with the antagonists (Fig. 4).

Following periodic check-ups, final impressions were made through a digital approach at 3 months after the implant surgery. A titanium custom abutment and a monolithic zirconia definitive prosthesis reflecting the scan data of the provisional restoration were fabricated and placed with a resin-modified glass ionomer cement (RelyX Luting 2 Cement; 3M ESPE). Both esthetic and functional outcomes were satisfactory (Fig. 5).

Placement of the definitive prosthesis. (A) Intraoral frontal view. (B) Periapical radiograph.

The present method of designing a prosthesis that reflects the movement of the mandible is effective in fabricating prostheses that do not receive unintended loading. In the past, movement of the mandible was recorded using a functionally generated path technique.7 Recently, several workflows have been proposed to implement this technique using a digital approach. However, the procedure is not intuitive and requires additional clinical and laboratory steps.8,9 Jaw motion analyzers are another tool to record mandibular kinematics. However, they are bulky, require an additional learning curve, and are expensive.10,11

In contrast, the present workflow is straightforward as it uses built-in software within the intraoral scanner and is compatible with a CAD software program. The anatomical structure formed by dental technicians can be preserved as much as possible. Moreover, simplifying the procedure and reducing the time for adjustment are advantageous in delivering screw-retained provisional restorations. If the intraoral scan data were obtained at the first visit, the time for prosthesis design on the surgery day could be further reduced.

This case corresponds to Type 1A classification in which implant placement and loading are performed immediately after extraction.14 An immediately placed implant and immediate provisionalization can reduce the period of edentulous time, thereby reducing esthetic discomfort to the patient, and showed better volume preservation than cases that did not perform immediate provisionalization13 Atraumatic extraction, flapless technique, and a bone graft procedure were performed to achieve this goal.15,16

In color-coded maps that superimposed the scan data of within 3 weeks post-surgery scan data over the pre-operative scan data, the red colored area appeared, indicating some distinct volumetric difference among the scan datasets (Fig. 6A-6C). However, these were considered to be a difference due to post-operative edema. From the timepoint of 2 months post-surgery and after the placement of the definitive restoration, soft tissue change was minimal compared to the pre-operative scan data (Fig. 6D-6F). The color-coded maps on the soft tissue areas were expressed with only plus sign values, and a creation of cross-sectional views aided in determining the direction of the surface changes. 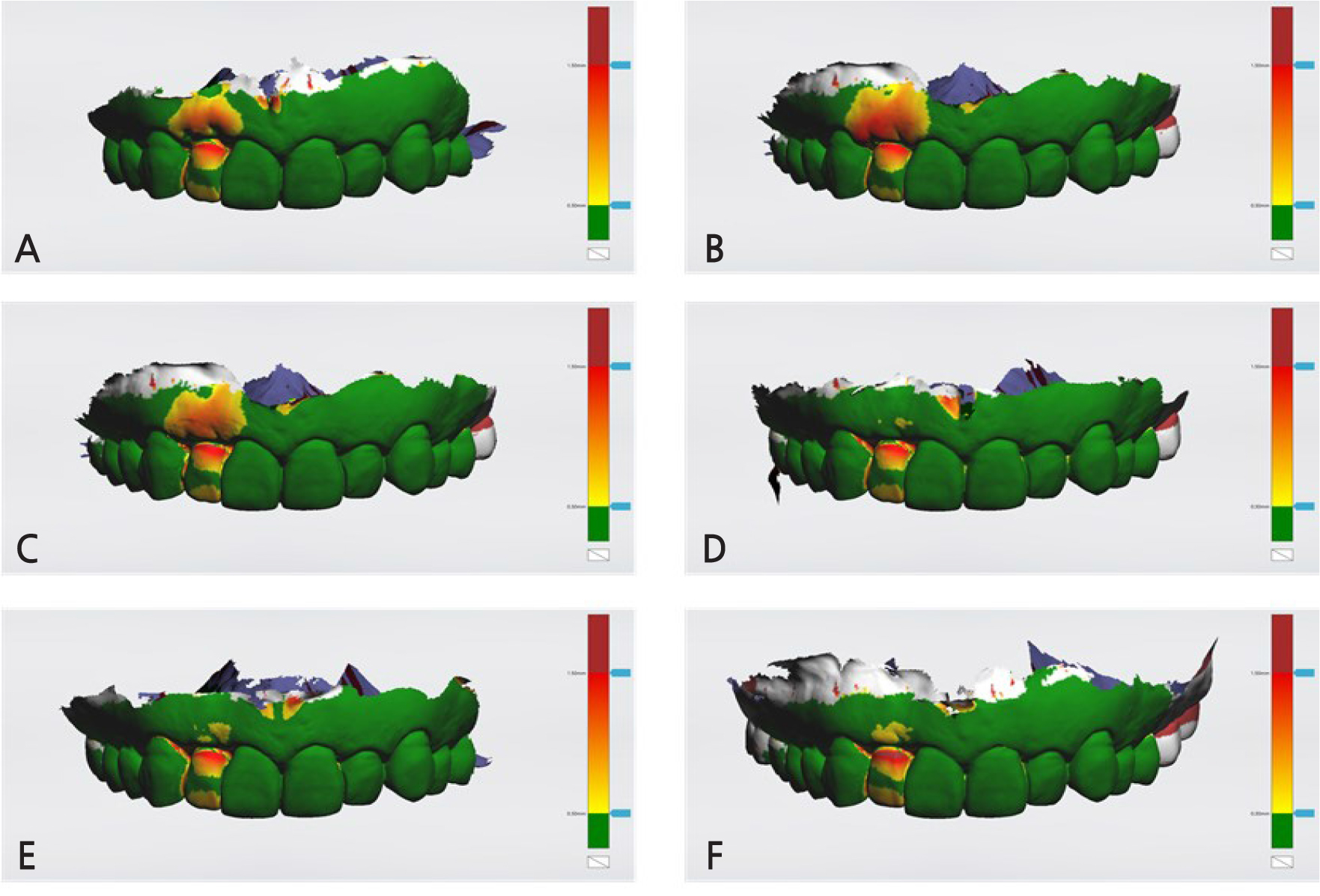 A maxillary anterior missing tooth region was successfully rehabilitated with a single implant. The provisional restoration was placed immediately after the surgery with minimal adjustment by recording dynamic mandibular movement with the intraoral scanner. The patient was satisfied with esthetic and functional outcomes of both the provisional and definitive prostheses.