Tooth-implant-supported Double-crown-retained Removable Denture in a Patient with Cleft Palate: A Case Report

A 35-year-old man with left unilateral cleft palate visited our hospital for prosthetic treatment. After the existing maxillary 10-unit fixed prosthesis was removed, the severely carious teeth were extracted, and the remaining teeth were re-evaluated. Because the periodontal support of the anterior teeth was insufficient due to severe alveolar bone resorption, two additional implants were placed in the positions of the right and left canines, and a tooth-implant-supported hybrid telescopic double-crown-retained denture with friction pins was fabricated as the definitive prosthesis. Although the opposing dental arch comprised natural teeth and fixed prostheses, the patient adapted well to the new prosthesis and was satisfied with its function, esthetics, and ease of maintenance.

Functional and esthetic rehabilitation methods for patients with cleft palate differ depending on the type and severity of the craniofacial abnormalities, and organized multidisciplinary treatments should be performed during the growth years of the patient. In patients with cleft lip and palate, the final step is the fabrication of a dental prosthesis,1 and the treatment options include fixed dental prosthesis and implant overdenture.

Implant overdentures exhibit better retention and stability than the traditional clasp- retained partial dentures. Implant overdentures are recommended when the patient's lip support is insufficient or when the appearance, such as a high smile line, needs to be corrected.2 Moreover, implant overdentures may be a better treatment option than fixed prosthetics and traditional dentures for patients with difficulty in oral hygiene management or with cleft palate, because of the ease of insertion, removal, and maintaining cleanliness.3,4,5,6

Attachment systems used to connect teeth and implants include locators, ball attachments, magnets, bars, and double crowns.7 The benefits of a double-crown removable denture include ease of oral hygiene maintenance, decrease in the lateral force on the abutments, separation of the individual abutment, possibility of using an abutment with questionable prognosis, cross-arch stabilization, and esthetic replacement in patients with extensive alveolar bone loss.8

The concept of the double crown design can be classified as conical, telescopic, or electroformed, according to the retention mechanism.9In the telescopic type, the clearance fit between the inner and outer crowns does not provide a retention force. Additional prefabricated elements are required for its retention, such as a hybrid telescopic crown with friction pins.10 In this patient, for each abutment and implant, the spark erosion method was used to form a channel of approximately 0.8 mm in diameter for placing the friction pin in the mesial or distal region. A friction pin was installed in this channel to obtain the necessary retention force.

When the number of remaining abutments is insufficient or unevenly distributed, additional implants can be placed for stable stress distribution in the abutments of the implant-supported double-crown overdenture.11 A study using finite element analysis revealed that the tooth-implant-supported double- crown denture minimized the harmful lateral load and protected the abutment.12Moreover, the denture function can be improved using teeth and implants for ease of maintenance, support, and stability.13

A 35-year-old man with left unilateral cleft lip and palate complained of pain in the maxillary right molar area. Approximately 25 years ago, the patient received treatment with a 10-unit fixed prosthesis with the maxillary right first molar, canine, and central and lateral incisors and maxillary left first and second premolars as the abutment teeth. The clinical and radiological examinations revealed residual roots of the maxillary right first molar and maxillary left first and second premolars due to severe caries. Moreover, severe alveolar bone loss was observed in the maxillary anterior area (Fig. 1). The maxillary right and left third molars were severely extruded because they had no opposing teeth. At maximum intercuspation, the bite was open, and there was occlusal interference between the molars on both sides due to eccentric movement of the jaw (Fig. 2).

Based on the patient’s age, the first treatment option was fixed prosthesis supported by implants in the maxillary right first molar and first premolar and maxillary left central incisor and first premolar regions. Due to the bone deficiency in the maxillary anterior and posterior regions, bone grafting was required for appropriate placement of the implants in the determined areas. However, the patient preferred a minimally invasive treatment procedure; hence, the treatment plan was revised to place implants in the areas where bone grafting was not required, and to fabricate a removable prosthesis. We decided to fabricate a tooth-implant-supported double-crown-retained removable denture rather than a clasp-retained denture because of the limited number of abutment teeth and implants required in the former and to ensure periodontal support for the teeth, denture stability and maintenance, and esthetics.

Two implants were placed in the maxillary right and left canine positions to achieve stable stress distribution in the abutments (TSIII, 4.0 × 10.0 mm; Osstem, Seoul, Korea) (Fig. 3). Intentional root canal treatment was performed on the remaining maxillary teeth to create a 4-mm interocclusal space required for the use of a hybrid telescopic double crown. For definitive prosthesis fabrication, a silicone impression was made using polyvinyl siloxane (Aquasil Ultra XLV and Aquasil Ultra LV; Dentsply Sinora, Philadelphia, PA, USA) for the maxillary implants and teeth using an individualized tray (Fig. 4). The inner crown, outer crown, and metal framework of the final prosthesis were made of Co–Cr alloy (VeraBond 2V; Aalbadent, Fairfield, CT, USA) (Fig. 5).14 For each abutment and implant, the spark erosion method was used to form a channel of approximate diameter under 0.8 mm for placing the friction pin in the mesial or distal region. A friction pin was installed in this channel to obtain a retention force. The axial convergence angle of the inner crown was set at 2 degrees, and a chamfer margin was designed to prevent movement between the inner and outer crowns. Laser welding was used to join the outer crowns to the metal framework, and artificial teeth were arranged using the group function concept on the metal framework for the wax trial dentures (Fig. 6). The vertical height and centric position of the trial denture were reconfirmed with the patient’s consent after the try-in process in the oral cavity, and a definitive prosthesis was fabricated. Glass ionomer cement was used to fix the inner crown (Fuji I; GC, Tokyo, Japan).

Panoramic radiograph after placing implants in the maxillary right and left canine regions. 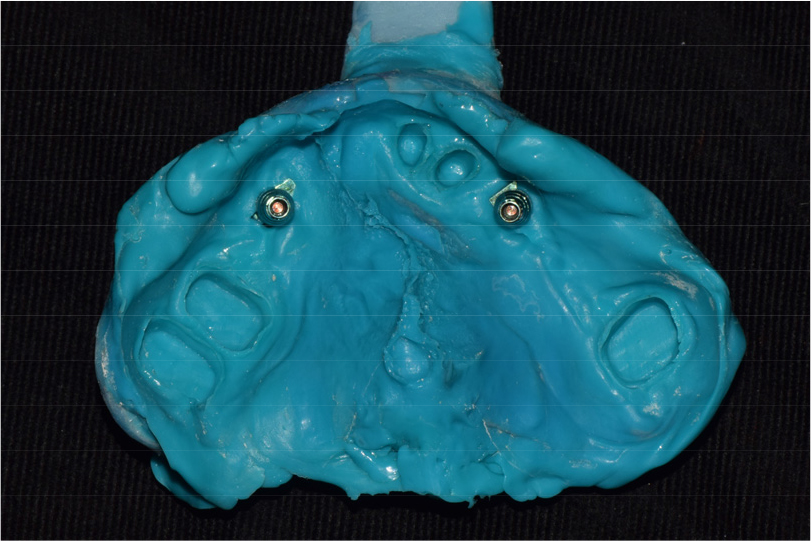 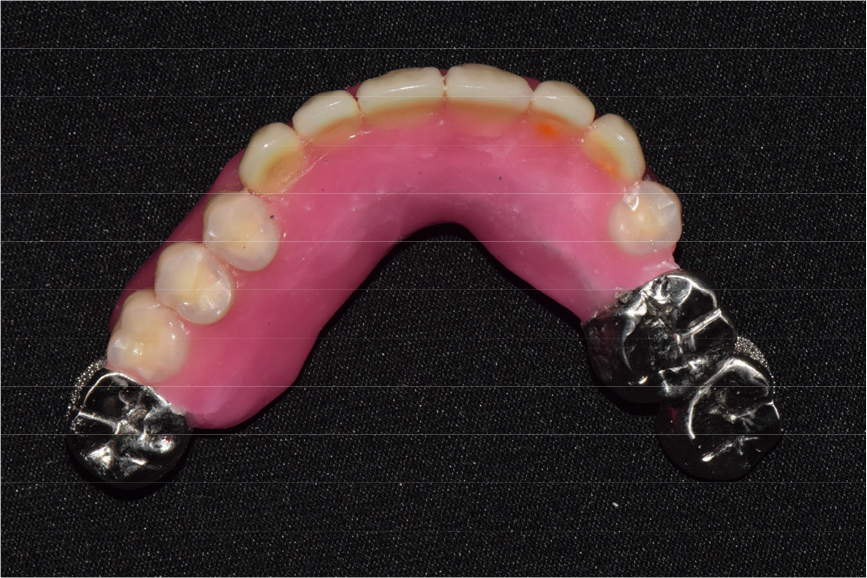 The patient was satisfied with the function and esthetics of the definitive prosthesis (Fig. 7). After 1 year of regular follow-up, the prosthesis, teeth, and implant were found to be in good condition with no complications.

Fixed prostheses can replace missing teeth and stabilize the arch in cleft palate patients for the recovery of function and esthetics.15,16 However, in some patients with numerous soft and hard tissue defects, restoration with a fixed prosthesis may not be the best option.17 In such cases, implant overdentures are a suitable alternative providing adequate esthetics and function.

The remaining teeth can serve as abutments, but if the number of abutments is insufficient or the arrangement is undesirable, an additional implant can be placed to ensure stable support.11 To connect the teeth and implants, an appropriate attachment system is required. A hybrid telescopic double crown using the friction pin method was used in our patient. Because the friction pin occupies limited space, the outer crown can be made esthetically pleasing by reducing the size of the inner crown. Additionally, it has the advantage that the retention force can be increased by activating the friction pin by bending it inward.

According to a systematic literature review conducted by Lian et al., the cumulative survival rate of implants was 98.72%, while that of dentures was almost 100% in dental-implant-supported double-crown dentures, indicating only minor biological or technical complications.11 Krennmair et al. reported that there was no failure of the abutment or implant in the follow-up period of up to 108 months with the maxillary tooth-implant double-crown denture, with only minor problems such as screw loosening reported.18 Fobbe et al. reported that the cumulative survival rate of implants was 99.5% and that of dentures was 97.2% in tooth-implant-supported double-crown dentures during a follow-up period of up to 11 years.19 This corroborated the results of previous studies. The connection of the tooth and the implant through the double crown can positively affect the prognosis of the implant and the survival of the remaining teeth; hence, this is considered a reliable treatment method.

Although the patient in this case had been treated previously with a fixed dental prosthesis for unilateral cleft palate, severe caries developed in the abutment teeth due to a lack of proper oral hygiene management, and a new prosthetic treatment was required. After the carious teeth were extracted, the remaining teeth were insufficient to provide adequate support; hence, two additional implants were placed. The new prosthesis was fabricated as an overdenture that connected the tooth and implant with a hybrid telescopic double crown using the friction pin method. The patient was satisfied with the function and esthetics of the prosthesis.

When restoring double-crown dentures, the tooth mobility, distribution of teeth within the arch, and periodontal tissue support of the teeth being considered as abutments should be evaluated. Furthermore, if complications such as abutment fracture occur, it is important to determine strategic implant placement and supplement the number of implants based on the condition of the opposing teeth. This can help ensure long-term stability and good prognosis.

Based on the above considerations and findings of previous studies, a long-term stable prognosis can be expected. Our patient showed good prognosis after a follow-up period of 5 years (Fig. 8). Regular visits to check the condition of the abutment and the fit of the denture are important factors for a good prognosis. Regular maintenance treatment of the abutments is essential. Moreover, when necessary, the movement of the dentures should be minimized by relining the dentures during regular follow-ups to compensate for the absorbed alveolar bone; the occlusion should also be evaluated and adjusted.

Intraoral photograph at 5-year follow-up. (A) Occlusal view of maxilla, (B) Frontal view.

This case report shows that a friction pin-type hybrid telescopic double-crown removable denture can be a successful treatment option in patients with unilateral cleft lip and palate and that appropriate stress distribution in the abutments can be achieved through additional implant placement.