Purpose: This study was conducted to evaluate the roughness changes of zirconia surface after applying three different concentrations of ZrO 2 slurry (ZirADD, PNUADD, Busan, Korea) to the pre-sintered zirconia surface and shear bond strength between zirconia and self-adhesive resin cement.

Materials and Methods: Experimental groups were classified into control and three test groups according to the surface treatment with different slurry concentration (15% (ZA15), 30% (ZA30), and 50% (ZA50) group). After sintering all the specimen, roughness change was measured, and bond strength of the self-adhesive resin cement was examined.

Conclusion: Within the limitations of this study, ZrO 2 slurry application on pre-sintered zirconia surface can be an effective method to obtain strong bond between zirconia and self-adhesive resin cement by increasing zirconia surface roughness after zirconia sintering process.

As social conditions and welfare improve around the world, human life expectancy is increasing.1 In order to have a healthy old age, having healthy oral health is a prerequisite.2 However, data from the National Institute of Dental and Craniofacial Research (NIDCR, National Institutes of Health, United States) have reported that about 90% of over 70 years old people have a periodontal-related diseases.2, 3, 4 Periodontal disease causes clinically diverse symptoms like a gingival hemorrhage, swelling, and eventually tooth loss.2, 5 To replace the missing teeth, implant surgery is being increasingly performed and popularized in various situations.6

Among the method of the implant prosthetic treatments, a method of using titanium abutment and using a metal core for the upper prosthesis had been treated a lot, but as aesthetic demands increase, the use of the zirconia, which is capable of reproducing the tooth color, as the upper prosthesis is increasing.7 Various methods to increase the bonding strength between zirconia and titanium have been reported.8, 9, 10 However, all of the previous studies were methods of increasing bonding strength via treating airborne- particle abrasion to zirconia.8, 9, 10

A cylindrical metal mold having an inner diameter of 6 mm and a thickness of 3 mm was placed on the surface-treated zirconia disc. Self-adhesive resin cement (MAZIC CEM, Vericom, Anyang, Korea) with 10- methacryloyloxydecyl dihydrogen phosphate (MDP) was filled in the metal mold (8 mm outer diameter, 6 mm inner diameter, and 3 mm height) and light cured for 20 seconds on the side and 20 seconds from the top. After light curing, all specimens were stored in distilled water at room temperature for 24 hours before shear bond strength test. Shear bond strength test was performed using a testing machine (OUT-05, Oriental TM Corp., Gyenonggi-do, Korea) at a constant crosshead speed 1.0 mm/ min until failure (Fig. 1).

SPSS software ver. 25.0 (SPSS Inc., Chicago, USA) was used for the statistical analysis and all measured values were evaluated with the 5% of the level of significance. Surface roughness values were analyzed by the Kruskal-Wallis tests with post hoc pairwise Mann-Whitney analyses. And the results of the shear bond strength were analyzed using one-way analysis of variance (ANOVA) and Tukey’s post-hoc test.

Surface roughness images of each experimental group captured by SEM were shown in Fig. 2. The control group showed a typical untreated surface and the test groups showed increasing surface roughness with irregularity. 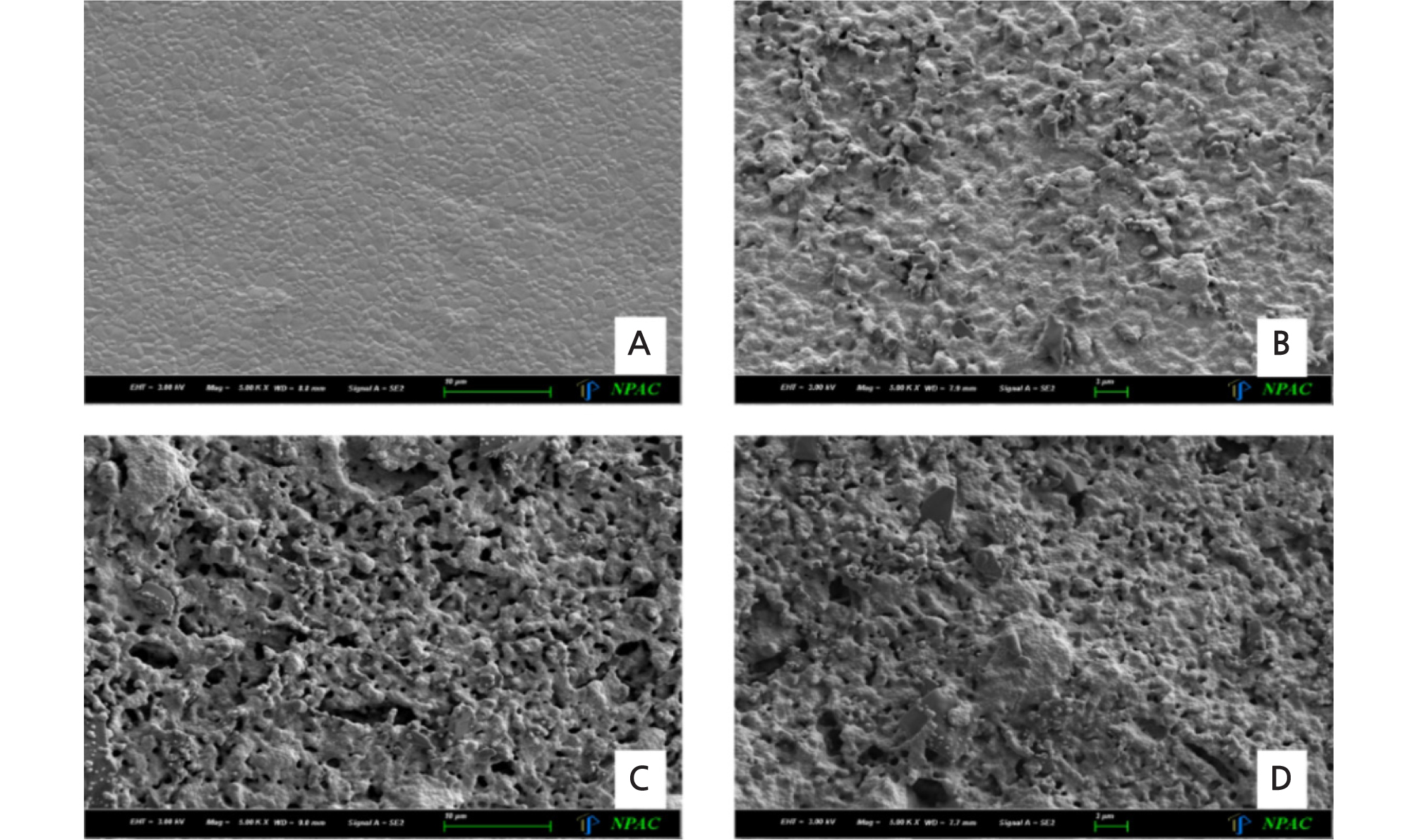 Values with the different lowercase letter in each groups are significantly different at P < .05

Values with the different lowercase letter in each groups are significantly different at P < .05

When ZrO2 slurry was applied to pre-sintered zirconia surface, shear bond strength with self-adhesive resin cement were measured higher than control group. A previous study reported that self-adhesive resin cement penetrates and interlocks with the network of nano-porosities of zirconia surface.17 The method using ZrO2 slurry with carbon nanoparticle was expected be helpful to increase bonding strength of resin cement by penetration and interlocking of resin cement. Furthermore, the surface roughness value of ZA50 was highest among experimental groups, whereas highest shear bond strength value was shown in ZA30. It seems that the too many zirconia particles in ZA50 group could not make perfect unification on the surface for increasing the roughness. These results are similar with other previous study that was reported the surface irregularities without undercut can decrease the bond strength after prolonged period.18 However, additional clinical studies are needed to certify interlocking between ZrO2 slurry applied coating layer and self-adhesive resin cement.

As this study was planned as a pilot study to evaluate surface roughness and shear bond strength, aging process like thermocycling was not included. Therefore, aging/stressing studies in vitro and long term in vivo studies are further required.

This study was supported by a 2-year research grant from Pusan National University.